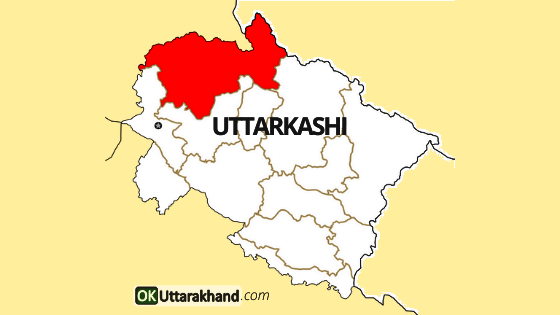 Uttarkashi district is located in the Garhwal division of the Uttarakhand state. The administrative headquarters of the district is at Uttarkashi town. Uttarkashi lies high in the Himalayan mountain range, and the district contains the source of both the Ganges from Gangotri and Yamuna from Yamunotri rivers which attract thousands of Hindu pilgrims.

The town lies on the main route to Gangotri, has many Hindu temples, and is also considered an important Hindu pilgrimage center. Uttarkashi literally means North Kashi. It’s one of the favorite places of Lord Shiva called this Kashi Viswanath.

Uttarkashi at a Glance

The terrain and climate of the Uttarkashi district provide an uncongenial physical environment for human settlement. Yet undaunted by hazards and hardships this land was inhabited by many hilly tribes since ancient times bringing out the best in man his adaptive talents. The hill tribes namely Kiratas, Uttara Kurus, Khasyas, Tanganas, Kunindas, and Pratanganas find references in the Upayana Parva of Mahabharata.

The land of Uttarkashi district has been held sacred by Indians since ages where the seers and sages had found solace and spiritual aspirations and performed penances and where they performed their sacrifices.

The Vedic language was better known and spoken here since ancient times. People came here to learn the Vedic language and speech. According to an account given in the Mahabharata, a great sage Jada Bharata performed penances at Uttarkashi. The Kedar Khand of Skanda Purna refers to Uttarkashi and the rivers Bhagirathi, Jahanavi and Bheel Ganga. The district of Uttarkashi was part of the Gharwal Kingdom ruled by the Garhwal dynasty that carried the cognomen `Pal’ which was changed to Sah during the 15th century conferred by the Sultan of Delhi perhaps Bahlul Lodi.

In 1803 Gorkhas of Nepal invaded Garhwal and Maharaja Amar Singh Thapa was made Governor of this region. The Gorkhas came into contact with the Britishers in 1814 as their frontiers in Gharwal became determiner with those of the British. The border troubles prompted the Britishers to invade the Garhwal Kingdom.

In April 1815 Gorkhas were ousted from the Garhwal region and Garhwal was annexed as British district and was split up into eastern and western Garhwal. The eastern Garhwal was retained by the British Government. The western Garhwal, lying to the west of the Alaknanda river with the exception of the Dehradun was made over to the heir of Garhwal dynasty Sudarshan Sah. This region came to be known as Tehri Garhwal and it was merged with the state of Uttar Pradesh in 1949 after India attained independence in 1947.

Uttarkashi district was created on 24 February 1960, out of what then constituted the Parganas of Rawain and Uttarkashi of Rawain tahsil of erstwhile Tehri Garhwal district. It sprawls in the extreme north-west corner of the state over an area of 8016 square kilometers in the rugged terrain of the mystic Himalayas. On its north lie Himachal Pradesh State and the territory of Tibet and the district of Chamoli in the east.

The district is named after its headquarters town Uttarkashi, an ancient place with rich cultural heritage and as the name suggests is the Kashi of the north (Uttara) held almost as high a veneration as Kashi of the plain (Varanasi).

Both the Kashi of the plain (Varanasi) as well as the Kashi of the north are situated on the banks of the river Ganga (Bhagirathi). Uttarkashi lies between the rivers Syalam Gad also known as the “Varuna” and Kaligad also known as the “Asi”. The Varuna and the Asi are also the names of the rivers between which the Kashi (Varanasi) of the plain lies. One of the holiest Ghats in Uttarkashi is Manikarnika so it is the one by the same name in Varanasi. Both have temples dedicated to Kashi Vishwanath.

Woolen clothes made from sheep’s wool, Wooden sculptures, and eco-friendly baskets are the ancient arts in Uttarkashi. Garhwali music is the traditional music enjoyed by Uttarkashi people.

There are many cultural and religious fairs like famous Magh Mela and Sainik Mela, Krishi Mela organized by District Administration Uttarkashi as it invites people of all disciplines to rejoice the occasion. Being the district headquarters these fairs attract a large number of visitors and tourists every year.

Garhwali is the most common first language of the Uttarkashi district. Though Hindi is widely used as a lingua franca. Few minority languages like Mahasu Pahari and the Tibeto-Burman Jad are also used in some villages.

Hindus are in majority in the Uttarkashi district. They are around 99.42 percent of the total population.

Uttarkashi is a hilly district of Uttarakhand state. The administrative headquarter of the district is located in Uttarkashi town. The source of India’s top two sacred rivers; the Ganga and the Yamuna are located in Gangotri and Yamunotri respectively.

The Uttarkashi district is divided into 5 subdivisions. It has 8 tehsils (including 2 sub-tehsil), 6 blocks, and 6 municipalities. The district covers 500 Gram Panchayats and 7 police stations.

Uttarkashi district is subdivided into 8 tehsils including 2 sub-tehsil.

There are 3 Assembly Constituencies in the Uttarkashi district.

Uttarkashi district has many schools, Junior colleges for boys and girls and one Post Graduate college affiliated to HNB Garhwal University. The Govt Polytechnic Uttarkashi, situated in Joshiyara around 3–4 km away from the main city, provides higher education in technology. Some of the other degree colleges and istitutions in Uttarkashi are listed below.

Uttarkashi is a very important tourist destination in Uttarakhand. The place is known for its stunning natural beauty. Pilgrims from all around the country flock to this region too, due to its religious heritage.

There are many temples in Uttarkashi that you can visit during your trip to the place and the most famous one among these is that of Lord Vishwanath. This is the largest temple in the region, and the most frequented one as well. Many other temples and shrines are present in Uttarkashi and they cater to a wide variety of Gods, including Parshuram, Annapurna, Dattatrya, Bhairav, Laksheswar, and Ekadashrudra.

Places To Visit in Uttarkashi

Gangotri Temple: Gangotri Dham is one of the four sites in the Char Dham pilgrimage of Uttarakhand. Gangotri is the origin of the River Ganges and Gangotri Dham the seat of the goddess Ganga. The river is called Bhagirathi at the source and acquires the name Ganga (the Ganges) from Devprayag Sangam onwards where it meets the Alaknanda. The origin of the holy river is at Gomukh set in the Gangotri Glacier which is 19 km away from Gangotri.

Yamunotri Temple: Yamunotri is situated at an altitude of 3,293 meters (10,804 ft) in the Garhwal Himalayas in Uttarkashi district. It is also one of the four sites in Char Dham pilgrimage of Uttarakhand. The sacred shrine of Yamunotri devoted to the Goddess Yamuna. The chief attraction at Yamunotri is the Yamunotri temple and the holy thermal springs at Janki Chatti which is 7 km away.

Gomukh: Gomukh is the source of the Bhagirathi River in Gangotri Glacier, It is one of the primary headstreams of the Ganges River. The place is situated at a height of 13,200 ft (4,023 m) in the Uttarkashi district.

Dayara Bugyal: Dayara Bugyal is grassland starting at 2600 meters and goes up to 3500 meters. The 9 km of a trek through the woods and rhododendron tress takes one to this pristine place. In summers, the shepherds reach here with their cattle and stay till the onset of winters. In winter, the Bugyal (meadows) turn into snow land with the potential of skiing and snow activities.

Kalindi Pass: It is situated at 5990 meters above sea level. Kalindi pass connects Gangotri valley with Badrinath. Kalindi pass is also famous for being the highest trekking pass in the world. More than 40 Himalayan peaks can be seen during the 110 km of the trek from Gangotri To Badrinath.

Harshil Valley/ Dharali: The Harshil valley is situated at 2660 meters above sea level. It offers complete contrast with what one finds in summers and it is very popular among snowfall lovers. Streams get frozen and black tarmac gets hidden under a thick white carpet in the winter season.

Gartang Gali: This wooden bridge was the trade route between India and Tibetan older times. The nomads (Bhotiya tribe) ferried their goods on yaks from this bridge for barter with their other country part.

Dodital: Dodital is a famous freshwater lake in Uttarkashi district. River Assi Ganga rises from Dodital and then joins Bhagirathi. Their confluence is at Gangotri. To reach Dodital, From Uttarkashi, a short jeep ride of 19 kilometers will take you to Sangamchatti from where the 24 km trek to Dodital begins.

The Nehru Institute of Mountaineering is located in Uttarkashi. It is also a famous tourist spot in the region. You can also visit the hot water springs in the region of Gangnani village during your trip to Uttarkashi.

The temperature in Uttarkashi remains pleasant during the summer season. But In winter, the temperature falls down to zero degrees in some regions. June is the warmest month of the year. The lowest temperatures in the year occur in January.

How To Reach Uttarkashi

Uttarkashi is easily accessible by motorable road from any city of India. And if you are planning to visit Uttarkashi then there are two routes through which you can come to Uttarkashi. You can choose any route between Dehradun or Haridwar.

How To Reach Uttarkashi By Air

How To Reach Uttarkashi By Train

How To Reach Uttarkashi By Road