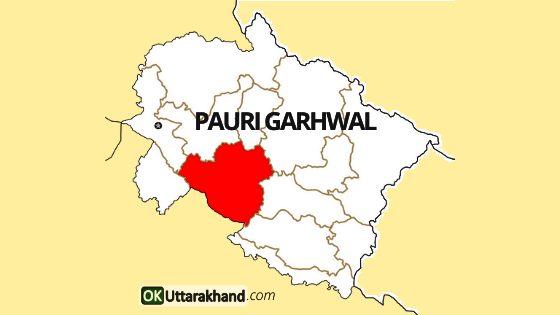 Pauri Garhwal or Paudi Garhwal is one of the largest districts of Uttrakhand with an area of 5,230 square kilometers. It is sometimes referred to simply as Garhwal but it is only a part of it, shares Gahrwal region with the Tehri Garhwal. Pauri is a town fairly located on the high altitude at the height of 1650 m amongst the Deodar forest. Pauri is a headquarter of the Pauri Garhwal district.

Nayyar River is the major river of the district and is one of the major tributaries of Alaknanda which is called Nayyar after the confluence of eastern and Western Nayyar at Satpuli. Pauri Garhwal is Filled with places of tourist interest and it has many temples to explore.

This article will help you as a travel guide in the Pauri Garhwal district. Here you will find a detailed guide on tourism, weather, education, distance, route map and places to visit in Pauri Garhwal.

Pauri Garhwal at a Glance

The evolution of human civilization in the Garhwal Himalayan has been parallel to the rest of the Indian sub-continent. Katyuri was the first historical dynasty who rules over unified Uttarakhand and left some important records in the form of inscriptions, forts, and temples. In the later period after the downfall of the Katyuri dynasty, it is believed that the Garhwal region was fragmented in more than sixty-four principalities ruled by the Chieftain. One of the principal Chieftainship was Chandpur Garhi, which was ruled by a descendent of Kanakpal.

In the mid 15th century AD, Chandpurgarh emerged as a powerful principality under the rule of Jagatpal (1455 to 1493 A.D.), who was a descendent of Kanakpal. In the fag end of the 15th century, Ajaypal enthroned the Chandpurgarh and succeeded in unifying and consolidating various principalities on the region with in a Kingdom and his Kingdom came to known as Garhwal. Subsequently, he had transferred his capital from Chandpur to Devalgarh before 1506. Later Srinagar became his capital from 1506 to 1519 AD.

King Ajaypal and his successors ruled the Garhwal for nearly three hundred years. During this period they had faced a number of attacks from Kumaon, Mughal, Sikh, Rohilla. An important event in the history of Garhwal was the Gorkha invasion from Nepal. It was marked by extreme brutality, massacre, and marauding armies. After capturing Doti and Kumaon, Gorkhas attacked Garhwal and reached as far as Langoorgarh despite stiff resistance put up by the Garhwali forces. But in the meantime, news came of a Chinese invasion and the Gorkhas were forced to lift the siege and blockade.

In 1803, Gorkha again mounted an invasion. After capturing Kumaon, they continuously attach Garhwal in three columns. Five thousand Garhwali soldiers could not stand the fury of their attack and the King Pradyumna Shah escaped to the Dehradun region to organize his defense. But his forces were no match to the Gorkha forces. Garhwali soldiers suffered heavy casualties and the King himself was killed in the battle of Khudbuda in Dehradun. The Gorkhas became the masters of the entire Garhwal Kingdom in 1804 and ruled the territory for the next twelve years.

Gorkha ruled in the Garhwal area ended in 1815. The British drove the Gorkhas to the West of Kali river, despite stiff resistance offered by them. After the defeat of the Gorkha army, the Britishers on 21 April 1815, decided to establish their rule over the eastern, half of the Garhwal region, which lies east of Alaknanda & Mandakini river, later on, known as ‘British Garhwal’ and Dun of Dehradun. The remaining part of the Garhwal in the west was restored to King Sudershan Shah who established his capital at Tehri.

At the time of independence, Garhwal, Almora and Nainital districts were administered through the commissioner of Kumaon division.

In ancient times, when there were no such facilities of communication and transport, fairs & festivals had played an important role in social gathering and meeting with relatives and friends. Together with recreation, cultural events have social significance to remember the religious importance and social messages behind them. Most of the festivals of the region are based on mythological traditions.

Makar Sankranti also called ‘Uttarayni’ in Garhwal, is celebrated as ‘Khichriya Shankranti’ in which ‘Khichri’ of ‘Urad Dal’ is prepared and Rice & ‘Urad Dal’ is donated to the Brahmins. On this day, ‘Gindi’ fairs are organized in different places like Dadamandi, Thalnadi, etc. of the district.

On ‘Basant Panchami’, also called ‘Sripanchami’, the worships of ‘Kshetrapal’ or ‘Bhumiya’ Devtas are organized and the group folks ‘Thadiya’ and ‘Chauffula’ are started. Some other fairs of Pauri Garhwal are Gindi Mela, Vaikunth Chaturdashi Mela of Srinagar and Binsar Mela.

The predominant first language of the district is Garhwali. But there are also speakers of Hindi and, to a smaller extent, Nepali and Kumaoni.

Hindus are in majority in the Pauri Garhwal district. They are around 96.06 percent of the total population.

In 1960, what was known as Garhwal district was divided into Pauri Garhwal and Chamoli district.

The district is bordered on the southwest by Bijnor district, Uttar Pradesh, and, clockwise from west to southeast, by the Uttarakhand districts of Haridwar, Dehradun, Tehri Garhwal, Rudraprayag, Chamoli, Almora, and Nainital.

The District is administratively divided into nine tehsils and fifteen developmental blocks and five municipalities. The district covers 1212 Gram Panchayats and 3447 villages.

Pauri Garhwal district is subdivided into 13 tehsils. The District is divided into 6 Sub Divisions for administrative convenience. A Subdivision is headed by Sub Divisional Magistrate (SDM). The Sub-divisional Offices are a replica of Collectorate in the matter of a number of sections and they act as an intermediary in the administrative setup. Structured of subdivision and tahsils are listed below:

There are 6 Assembly Constituencies in the Pauri Garhwal district.

There is 1 Parliamentary Constituency that is Garhwal.

Pauri, Kotdwar, Lansdowne, and Srinagar are major centers of education in the Pauri Garhwal district. Govind Ballabh Pant Engineering College is at Ghurdauri. Hemwati Nandan Bahuguna Garhwal University, Veer Chandra Singh Garhwali Government Medical College, and National Institute of Technology in Srinagar are famous institutions in Pauri Garhwal, Uttarakhand. Some of the other schools and colleges in Pauri Garhwal are listed below.

Places To Visit in Pauri Garhwal

Khirsu: Khirsu is a place where snow-covered mountains offer a panoramic view of the Central Himalayas. It attracts a large number of tourists. On this hill station, nature’s lover can get a clear view of many named & unnamed peaks. It is located 19 km Away from Pauri at an altitude of 1,700 m. Khirsu is a peaceful spot, free from pollution. Only the chirping of birds breaks the tranquility of the adjoining thick Oak and Deodar forests and apple orchards. The ancient temple of Ghandiyal Devta in the vicinity is also well worth a visit.

Lansdowne: Lansdowne is situated at an elevation of 1780 m above sea level. The beautiful town of Lansdowne is in the south of Pauri en route Kotdwar and is surrounded by thick oak and blue pine forests offering great mountain views. Lansdowne was originally a popular hill station with the British. Attracted by its healthy climate and natural beauty, they established a cantonment here. The famous Garhwal Rifles of the Indian Army has its headquarter here.

Doodhatoli: Doodhatoli situated at an altitude of 3100 m. It is covered with dense mixed forest. Thalisain is the last bus terminus from where Doodhatoli is at a distance of 24 km by trek. It commands a panoramic view of the Himalayan ranges and one of the most picturesque places.

Binsar: Binsar is situated at an altitude of 2480 m and is known for the surreal beauty of the snow-laden peaks. Pauri to Binsar distance is 114 kilometers. It is a celebrated place of worship and natural beauty set amidst dense forest of Oak, Deodar, and Rhododendron. There is a temple dedicated to Lord Shiva which has archaeological significance. Thalisain is the last bus stop which is 100 km away from Pauri. From here a 22 km bridle path leads to Binsar.

Tara Kund: Tarakund is situated at a height of 2,200 m and is a picturesque spot amidst lofty mountains in Kamargarh. A small Tara Kund Lake and an ancient temple adorn the place. Mother Tara (Parvati) did penance here. Kund and pond situated amidst beautiful forests are also situated from all around, which further enhances its beauty.

Kanvashram: Kanvashram is known as the birthplace of emperor Bharat. It Situated on the bank of river Malini at a distance of 14 km from Kotdwar. Kanva Rishi Ashram is an important place from the historical and archaeological point of view. It is believed that Sage Vishwamitra meditated here and Indra (the king of gods) was scared by his intense meditation and sent a beautiful heavenly damsel named Menka to disturb him. Menka finally succeeded in diverting Vishwamitra’s attention. After giving birth to a girl she went back to heaven. This girl later became Shakuntala who got married to the prince of Hastinapur. She gave birth to Bharat, the prince after whom our country is called Bharat.

Bharat Nagar: Bharat Nagar abounds in immense natural beauty at a height of 1,400 m and is 22 km away from Kotdwar. According to many Hindu texts, this place was full of life-giving herbs in ancient times. From here one can have a beautiful view of the Himalayan peaks, Kalagarh Dam, and Kotdwar town.

Kalagarh: Kalagarh Situated at a distance of 48 km from Kotdwar. It is an ideal place for nature lovers. Kalagarh dam across Ram Ganga River is also worth visiting. Accommodation is available at the Irrigation & Forest Rest houses.

The climate of Pauri Garhwal district is mostly pleasant in summer and cold in winter. In the rainy season the climate remains cool and the landscape green. However, in Kotdwar and the adjoining Bhabar area, it is temperate to quite hot, reaching the high 30° Celsius during the summer. In the winter, many parts of Pauri receive snowfall when the temperature falls to freezing point.

Pauri Garhwal has a sub-temperate to temperate climate, which remains pleasant throughout the year. The maximum temperature recorded in the month of June is 45°C at Kotdwar while in the higher reaches at Dudhatoli it only rises to 25°C. Temperature descends to a minimum of 1.3°C in January and means monthly temperature for the region ranges from 25°C to 30°C.

The hilly terrain with its densely forested slopes receives adequate rainfall generally commencing from mid-June and extending till mid-September. Occasional rainfall is also recorded in winter. The average annual rainfall in the district is 218 cm. about 90 percent of which is generally concentrated over the monsoon.

How To Reach Pauri Garhwal

Pauri District is well connected with major cities in India by motorable roads. Pauri is the main town that is well connected to all parts of the districts and adjoining areas. The Tehri to Moradabad State highway connects the major destinations of Pauri district like Kotdwar, Lansdowne, Pauri, Srinagar, etc.

How To Reach Pauri by Air

The Nearest Airport is Jollygrant in Dehradun which is around 155 km from the district HQ – Pauri. A newly constructed bridge at Devprayag over the confluence of river Alaknanda and Bhagirathi had cut short the accessibility of Pauri via Rishikesh by 18 km. There are regular buses, taxi’s, car rentals run directly from Airport Jollyfrant To Pauri Garhwal.

How To Reach Pauri by Train

The nearest railway station is Kotdwar (108 km) or Rishikesh (117 km). Accessibility condition is very nice with Railhead at each entry points like Kotdwar, Rishikesh, Haridwar & Ramnagar.

How To Reach Pauri by Road

Pauri Garhwal is well connected to Dehradun, Rishikesh, Haridwar, Kotdwar and other cities of the region. There are daily scheduled Uttarakhand Roadways, GMOUL, KMOUL, and other private buses. They are easily available at reasonable prices.