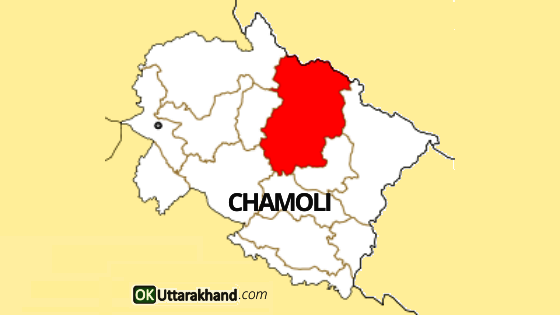 Chamoli district hosts a variety of destinations of the pilgrim and tourist interest. Badrinath Temple, Hemkund Sahib, Valley of Flowers and Auli. Places like the valley of flowers in Chamoli proved itself “the most spectacular in its natural assets”.

Here we will discuss the weather and climate, tourism, education, route map, distance and places to visit in Chamoli district. In this article, we will try to cover all aspects of the Chamoli district.

Chamoli at a Glance

In 1960, The current region of Chamoli district was the part of the district of Pauri Garhwal of the Kumaon. It occupies the north-eastern corner of the Garhwal tract and lies in the central or mid-Himalayas. The snowy range of this region is described in ancient books as Bahirgiri, one of the three divisions of the Himalayan mountains.

Today’s Garhwal was known as Kedar-Khand in ancient times. And the district Chamoli of “Garhwal’’ known as the land of forts. In Puranas, Kedar-Khand was said to be the abode of God.

It seems from the facts Vedas Puranas, Ramayana, and Mahabharat that these Hindu scriptures are scripted in Kedar-Khand. It is believed that the first script of Vedas written by Lord Ganesha in Vayas Gufa situated in the last village Mana only four km from Badrinath.

According to Rigveda (1017-19) after Inundation (Jalpralay) Sapt-Rishis saved their lives in the same village Mana. Besides there, the roots of Vedic literature seem to be originated from Garhwal because the Garhwali language has a lot of words common with Sanskrit.

The workplace of Vedic Rishis is the prominent pilgrim places in Garhwal specially in Chamoli like Atrimuni Ashram in Anusuya about 25 km from Chamoli town.

And the workplace of Kashyap Rishi at Gandhmadan Parwat near Badrinath. According to Aadi-Puran Ved Vyasa scripted the story of Mahabharat in Vyas Gufa near Badrinath.

Pandukeshwar a small village situated on the Rishikesh Badrinath high-way from where Badrinath is just 25 km away is regarded as Tapsthali of king Pandu. In Kedar-Khand Puran this land is regarded as the land of Lord Shiva.

The authentic script about the history of Garhwal is found only 6th A.D onward. Some of the oldest examples of there are the Trishul in Gopeshwar, Lalitpur in Pandukeshwar.

The Narvaman rock script in Siroli the Chandpur Gari rock script by king Kankpal authenticates the history and culture of Garhwal.

Some Historians and scientists believe that this land is the origin of the Arya race. It is believed that about 300 B.C. Khasa invaded Garhwal through Kashmir, Nepal, and Kumaon. A conflict grew due to this invasion a conflict took place between these outsiders and natives. The natives for their protection built small forts called “Garhi’’. Later on, Khasa defeated the native totally and captured the forts.

After Khasa, Kshatriya invaded this land and defeated Khasa accomplished their regime. They confined the Garhwal Kingdom of hundreds of Garhi in to fifty-two Garhi only. One Kantura Vashudev general of kshatriya established his regime on the northern border of Garhwal and founded his capital in Joshimath then Kartikeypur Vashudev Katyuri was the founder of Katyura dynasty in Garhwal and they reign Garhwal over hundreds of years.

In this period of Katyuri regime Aadi-Guru Sankaracharya visited Garhwal and established Jyotrimath which is one of the four famous Peeths established by Aadi-Guru Sankaracharya. In Bharat Varsh others are Dwarika, Puri, and Sringeri. He also reinstated idol of lord Badrinath in Badrinath, before this the idol of Badrinath was hidden in Narad-Kund by the fear of Buddhas. After this ethicist of Vedic cult started to pilgrim Badrinath.

According to Pt.Harikrishna Raturi, King Bhanupratap was the first ruler of the Panwar dynasty in Garhwal who founded Chandpur-Garhi as his capital. This was is strongest Garh for the fifty- two Garhs of Garhwal.

The devastating earthquake of 8th September 1803 weakened the economic and administrative set up of Garhwal state.

Taking advantage of the situation Gorkhas attacked Garhwal under the command of Amar Singh Thapa and Hastidal Chanturia. They established there reign over half of the Garhwal in 1804 up to 1815 this region remain under the Gorkha rule.

Meanwhile, the king of Panwar dynasty Raja Sudarshan Shah contacted east India Company and sought help. With the help of the British, he defected Gorkhas and merged the eastern part of Alaknanda and Mandakini along with the capital Srinagar in British Garhwal.

Chamoli is a completely a hilly district of Uttarakhand. This is the reason the major first language of the district is Garhwali. The district is also inhabited by Bhotiya ethnic group who adheres to Hinduism.

According to the 2011 census, Garhwali was spoken by 90% of the population. 5.1% of the population identified their language like Hindi, while smaller communities include speakers of Bhotia (1.6%), Nepali (1.4%), Kumaoni (1%) and Rongpo.

Hindus are in majority in the Chamoli district. They are around 98.52 percent of the total population.

The Chamoli district is administratively subdivided into 12 tehsils.

There are 3 Assembly Constituencies in the Chamoli district.

Apart from this, Chamoli comes under the Pauri Garhwal Loksabha seat. And there is a total of 607 Gram Panchayat and 39 Nyay Panchayat in the district.

The people of the Chamoli district are well educated. The literacy rate is 82.65% in the district of Chamoli which is higher than that state average of 79.63%. The gender ratio is also very good which is 1021 females for every 1000 males. There are many degree colleges and institutes are in the district.

Places To Visit in Chamoli

There are a number of places of interest and tourist sites in the Chamoli district.

Valley of Flowers National Park: Valley of Flowers is an Indian national park, located in North Chamoli, in the state of Uttarakhand. It is known for its meadows of endemic alpine flowers and the variety of flora. This richly diverse area is also home to rare and endangered animals and birds, including the Asiatic black bear, snow leopard, musk deer, brown bear, red fox, and blue sheep. Himalayan monal pheasant and other high altitude birds can be easily found in the park. It is around 3352 to 3658 meters above sea level. The gentle landscape of the Valley of Flowers National Park complements the rugged mountain wilderness of Nanda Devi National Park to the east. Nanda Devi National Park Reserve is in the UNESCO World Network of Biosphere Reserves.

Auli: Auli is a ski destination in the Chamoli district in the Himalayan mountains of Uttarakhand. Auli is also known as Auli Bugyal in Garhwali, which literally means “meadow”. It is located at an elevation of 2,500 meters to 3,050 meters (8,200 ft to 10,010 ft) above sea level. Auli can be reached by road or ropeway from Joshimath.

Rudranath Temple: Rudranath is a temple of Lord Shiva situated in the Chamoli district of Uttarakhand state which is one of the Panch Kedar. It is located at an altitude of 2290 meters above sea level. In the Rudranath temple, the face of Lord Shiva is worshiped, while the whole body is worshiped in the Pashupatinath of Kathmandu in Nepal.

Badrinath Temple: Badrinath is a well-known pilgrimage site in the famous Char Dhams of India. Lord Vishnu is worshiped as Lord Badri in Badrinath Dham. This Dham is one of the oldest pilgrims in the lap of the Himalayas. Badrinath Dham is situated on National Highway no 58. UTC buses play regularly between Badrinath and Rishikesh distance covering 297 km.

Hemkund Sahib: Gurdwara Hemkunt Sahib is situated at a height of over 15,000 feet above the sea level in the Himalayan ranges of district Chamoli. Sri Hemkunt Sahib has emerged as a popular center of Sikh Pilgrimage which is visited by thousands of Sikh devotees from all over the world every summer. Hemkund is inaccessible because of heavy snow from October through April.

There are several other adventure places, treks, and temples located in and around the district.

The Chamoli Gopeshwar lies on 800m to 8,000m above sea level as the elevation of the district ranges. The climate of the Chamoli varies largely depending on the altitude.

June is the warmest month of the year. And the lowest temperatures in the year occur in January. The average temperature in Chamoli Gopeshwar is 16.7 °C In a year, the rainfall is 1305 mm.

How To Reach Chamoli

Chamoli Gopeshwar is a headquarter of the Chamoli district. It is situated at a distance of 439 km from Delhi and about 250 km from Dehradun city. Gopeshwar, Karnaprayag, and Rudraprayag are the nearest major town to Chamoli.

How To Reach Chamoli By Air

How To Reach Chamoli By Train

How To Reach Chamoli By Road

Here are the popular Chamoli Routes name with (distance in brackets).