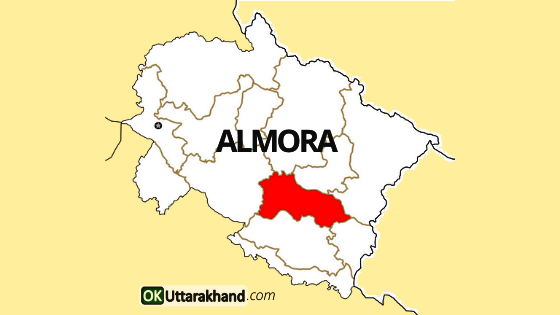 Almora district is a district in the Kumaon division on the eastern side of Uttarakhand state in India. The headquarters is at Almora town which is 1,638 meters above sea level. Almora is a picturesque district in the Kumaun region with a breathtaking panoramic view of Himalayas. It attracts tourists worldwide to its alluring grandeur of natural beauty.

The town of Almora is surrounded by the mighty Himalayan ranges, with holy shrines on the top of their peaks dedicated to Goddesses Banari Devi, Kasar Devi, and Sayahi Devi. River Kosi is a Himalayan river that originates from Dharpani Dhar (2,500 m) in the Baramandal region of Almora district.

Here we will help you as a travel guide to explore Almora district. We had compiled details on tourism, weather, education, distance, route map and places to visit in Almora.

Almora at a Glance

Almora has attracted people through the ages from all across the world. Swami Vivekananda visited Almora in 1897. Nobelist Rabindranath Tagore spent some memorable summers here.

The internationally acclaimed dancer Uday Shankar fell in love with this place and set up his dance academy here in 1938. Sitar maestro Ravi Shankar, artist Zohra Sehgal, the film star Guru Dutt all came here and became earnest lovers of the Almora town. Freedom fighter Govind Ballabh Pant and Our first Prime Minister Jawaharlal Nehru served a term of imprisonment in the Jail at Almora during the British rule. Jawaharlal Nehru was lodged in the Almora jail twice in 1934 and in 1945.

The landscape of Almora known for its views of the Himalayas, cultural heritage, handicrafts and cuisine, and is a business hub for the Kumaon region. Developed by the kings of the Chand dynasty, it was later maintained and further developed by the British regime.

Before establishment, The ancient town of Almora was under the possession of Katyuri king Baichaldeo. He donated the major part of this region to a Gujrati Brahmin Sri Chand Tiwari.

Later on, when Chand kingdom was founded in Baramandal, the Almora town was founded at this centrally located place in 1568 by Kalyan Chand. In the days of the Chand Kings, it was called Rajapur and that is why the name ‘Rajpur’ is also mentioned on a number of ancient copper plates.

Almora town was the administrative headquarter of the Kumaun district; that was formed in 1815 following the defeat of the Gorkha army in the Anglo-Gorkha war and the 1816 Treaty of Sugauli.

The Kumaun district then consisted of the complete Kumaon Division excluding the Terai district with its headquarters at Kashipur.

Almora is famous for its rich cultural heritage, unique handicrafts, and sumptuous cuisine, thus claiming its name as the cultural capital of Kumaon. It has natural beauty and magnificent wildlife, coupled with easy accessibility. Almora promises its tourists a visit full of fun and unforgettable moments with nature.

The whole Kumaun division, especially Almora is rich in folklore and the folk tales of Ajua-Bafaul, Narsingh and Ghana, Purukh Pant and the tales of Chivalry of Gangnath, and the mythical tales of Haru-Sem, Golu, Bin-Bhat, Ganwara, Kalsem, Churmal Airi, Pari and Anchari Jagar are prominent.

Many of these tales in the form of Jagar are sung in diverse melodies and Nyoli, Bhagnaula, Chapeli, Jhorra, Chanchari, Barrey, Shakun Geet and Banara belong to this group. The folk songs of this region make a poetic description of the glory of the Himalayan Region, the inherent charm of Nandadevi and other Devi Devta.

The major first language of the district is Kumaoni, spoken by over 90% of the population.

The headquarters of Almora district is at Almora town. The hill station of Almora is situated on a horseshoe-shaped ridge of the Himalayan mountains. The eastern portion of Almora is called Talifat and the western one is known as Selifat. The market is at the top of the ridge where both east and west parts jointly terminate. This market is famous by the name “Lal Bazaar” – Market of Red Coloured Shops.

Almora is surrounded by thick forests of pine and fir trees. Flowing alongside the city are rivers of Koshi (Kaushiki) and River Suyal (Salmale).

The district is administratively divided into 14 tehsils and 11 developmental blocks and four municipalities. There are 2289 villages in Almora district.

Almora district is subdivided into 14 tehsils. The District is divided into 6 Sub-Divisions for administrative convenience. A Subdivision is headed by Sub-Divisional Magistrate (SDM). The Sub-divisional Offices are a replica of Collectorate in the matter of a number of sections and they act as an intermediary in the administrative setup. Structured of subdivision and tahsils are listed below:

There are 6 Assembly Constituencies in the Almora district.

There is 1 Parliamentary Constituency that is Almora (SC).

Almora district is known for its cultural diversity and bewitching hill stations like Almora city, Lansdowne which is situated at an average elevation of 1,638 meters above sea level. It is spread across a 5-kilometer long ridge on Kashyap Hill. Surrounded by the dwindling pines and old oak trees, the city has a divine natural aura that is enough to allure anyone.

Places To Visit in Almora

Nanda Devi Temple: Nanda Devi Temple is one of the main attractions of Almora. This temple is almost a thousand years old. The carvings on the walls of this temple are extremely beautiful. The Nanda Devi Mela is organized here in a big way every year.

Public Museum: Govind Vallabh Pant Public Museum is near the Bus Stand in Almora. This museum provides a deep insight into the development of art, culture, and lifestyle of Kumaon. It has a rich collection of items of archaeological, historical and cultural significance. This museum has a unique collection of ‘Aipan’, a folk styled painting of Kumaon. The timings of the museum are from 10:30 AM to 4:30 PM on workdays.

Mrig Vihar Zoo: it is a deer park in Baldhauti which is 3 km away from Almora, set amidst green settings, it’s a popular tourist spot.

Golu Devta or Chital Temple: The Chitai temple is dedicated to Golu Devta which is 8 km away from the town of Almora. Golu Devta is the most prominent deity of Kumaon. The Chital temple is surrounded by dense pine forests. People worship the deity to fulfill their desires and as a symbol hang bells in the premises of the temple. There are thousands of bells hanging & ringing in and around the temple.

Kalimath: One can get a good view of Almora town and adjoining areas From Kalimath. This place is 4.5 km away from Almora. There is a temple dedicated to Kasar Devi beside Kalimath. It is believed that this temple was built in the second century.

Gananath: Gananath is known for its natural caves and an ancient Shiva temple. This place is 36 km away from Almora. A beautiful fair is hosted here every year during Kartik Purnima.

Katarmal: After the Sun temple of Konark, Katarmal is the second most important sun temple in India. This temple is around 800 years old and has archeological and architectural importance. Katarmal is 17 km away from Almora.

Binsar: Binsar was the summer capital of the Chand Kings, who ruled over Kumaon from the 11th to 18th centuries. Binsar is one of the most scenic spots in the Kumaon Himalayas and the ancient Shiva temple here at a height of 2,420 m was built by King Kalyan Chand. Binsar is a beautiful place that is absolute peace of mind and soul. It has a distance of 30 km from Almora.

Jageshwar: This secluded place amidst a dense Deodar forest, has a group of almost 125 temples dating back from 7th to 11th century AD during the Chand dynasty. The majority of the temples are dedicated to Lord Shiva and a few to different Goddesses of Hinduism. Jageshwar is considered as one of the 12 holiest Jyotirlingas of the country.

Lakhudiyar: Lakhudiyar literally means one lakh caves. This is one of the most important prehistoric sites in the hills. Fascinating pre-historic rock paintings are discovered within these caves. Its distance from Almora town is 20 km.

In Almora, January is the coolest month of the year. The days are often cool and the nights are freezing, an enjoyable time for honeymoon trip in Almora.

April is ideal for outings in the Almora hill station. The environment is pleasant and calm making it one of the most favorable months for taking up tour packages and enjoying a great holiday with loved ones in Almora. May is the hottest month of the year.

September offers an ideal time for exploring the hill station attractions like Almora. The weather and climate are pleasing, so it would be a good idea to plan or book tour packages for Almora this month. Enjoy sightseeing and outdoor activities. December offers cool winter days. This month is not ideal for exploring the outdoors.

How To Reach Almora District

Almora is well connected by motorable roads with the major cities of Uttarakhand state and northern India. Uttarakhand Transport Corporation (UTC) runs Buses from Almora bus station to Delhi and Dehradun. Taxis and Private Buses are mostly run by K.M.O.U. It connects Almora to other major destinations of the Kumaon region. The government of Uttarakhand is constructing an ISBT near lower mall road which will be very helpful for establishing a large tourist network in the Almora and around nearby destinations of the Kumaon region. It will be the second ISBT of Uttarakhand after ISBT Dehradun.

How To Reach Almora By Air

How To Reach Almora By Train

How To Reach Almora By Road

Almora is well connected by motorable roads with major cities of northern India like Delhi, Lakhnow, Chandigarh. Buses can be taken from ISBT Anand Vihar, Delhi to Kathgodam and Almora. Almora is connected with national highways NH87 and NH87E. Taxis to Almora are easily available in the Kumaon region. The distance from Delhi to Almora is 365 kilometers if you travel via Moradabad and Bilaspur. Delhi To Almora distance can be easily covered in 9-10 hours of time.

Almora Distance from Nearby Locations